About the Authors Melissa Colgin Abeln  [mcolgin@utep.edu] is Professor of flute and music literature at The University of Texas at El Paso and principal flutist of the El Paso Symphony Orchestra.  Her education includes the BM degree from the University of Alabama, MM and DMA degrees from the University of Texas at Austin, one year of private study in Paris, France, and a summer fellowship with the Yale School of Music.  Her major teachers include Sheryl Cohen, Raymond Guiot, Torkil Bye, Karl Kraber, and Bernard Goldberg. Previous positions include the Sinfonica Orquesta Autonoma de Guadalajara, Mexico, and the American Wind Symphony Orchestra. Beyond numerous solo/chamber music appearances in the US and Mexico over three decades, Melissa has performed in France, Norway, Austria, Germany and Turkey.  She has published articles for the journals of the National Flute Association, the Marcel Moyse Society, and Flute Talk. Her most recent research topic, The Memory Map (for music), has led to invitations to lecture at multiple universities and the National Flute Association’s annual conventions.  In 2011, a collaboration with Rebecca Payne Shockley, whose work on mapping music for piano dates from 1980, has resulted in presentations at the International Society of Music Education (Greece 2012) as well as conferences for the College Music Society (2012), Music Teachers’ National Association (2013), Texas Music Educators' Conference (2014) and the Canadian Flute Convention (2015). 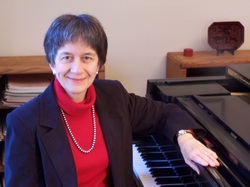 Rebecca Payne Shockley [shock001@umn.edu] is Professor Emerita of Piano Pedagogy at the University of Minnesota. She holds degrees in piano performance from Indiana University, a D.M.A. from the University of Colorado, and a Performer’s Licentiate from the Royal Academy of Music in London. She has given presentations on music learning for colleges, universities, and music teacher organizations across the U.S. and in England, Canada, Greece, Taiwan, China and Korea. She has also chaired the MTNA Pedagogy Saturday Committee and the Committee on Learning Theory for the National Conference on Piano Pedagogy. Shockley is the author of Mapping Music: For Faster Learning and Secure Memory – A Guide for Piano Teachers and Students, (A-R Editions, 1997, 2001), also published in Korean by Hanyang University Press in 2002.
For more information, see file below.